Hall of Fame boxer Evander Holyfield is returning to the ring.

Even though Holyfield has been retired since 2011, he has decided to take on heavyweight Kevin McBride in an eight-round exhibition match on June 5, Sports Illustrated reported citing sources.

The Holyfield-McBride matchup, which will be streamed on Triller, an entertainment and music platform, will be on the undercard of Teofimo Lopez’s lightweight title defense against George Kambosos. 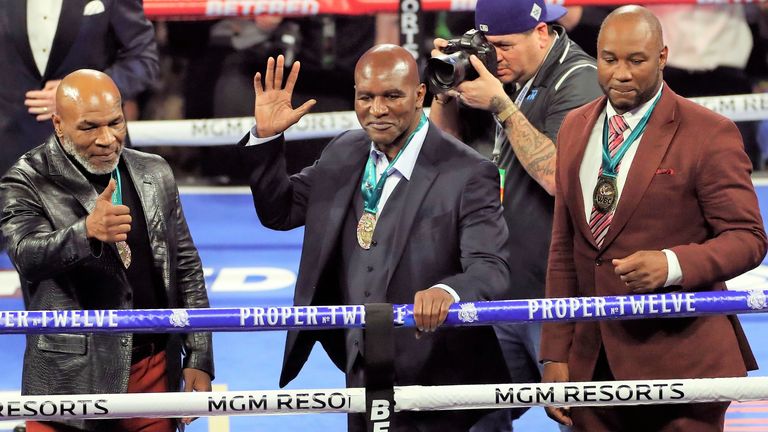 Last November, former heavyweight champion Mike Tyson defeated Roy Jones Jr. in an exhibition match. Holyfield had hoped to take on Tyson, who notoriously bit off part of Holyfield’s ear during a 1997 bout, which ended in a disqualification win for Holyfield, but the event failed to come together.

In 2005, McBride (35-10-1), who is recognized for knocking out Tyson in a 2005 match, sent Tyson into retirement at the tail end of his career with that victory. McBride eventually retired in 2011 after Mariusz Wach defeated him in a match.

Mike Tyson confirmed the fight with Evander Holyfield back in March, but as negotiations fell through, Holyfield is set to face off with Irish boxer Kevin McBride in Miami on June 5 on the undercard of Teofimo Lopez and George Kambosos Jr.’s fight.

The former undisputed heavyweight champion, Evander Holyfield, will set foot in the ring for the first time in over 10 years against McBride, who’s famous for his TKO against Tyson back in 2005 when Tyson failed to come out for the 7th-round. This was the last fight in Tyson’s pro career.

“So if you can’t fight Tyson, you got to fight the last guy that knocked him out,” advisor to Holyfield, Kris Lawrence said. “It’s not like Evander went deep into the well and found some geriatric guy.”

Holyfield’s last fight was in 2011 when he beat Brian Nielsen with a 10th-round TKO. McBride, nine years Holyfield’s junior, also last fought in the same year knocking out in the 4th-round by Mariusz Wach.

Lawrence still thinks a fight between Holyfield and Tyson will take place in the future.

“It’s just too big not to happen,” Lawrence reported to USA TODAY Sports. “That would be the biggest show on earth, you know?”

The Holyfield-McBride fight is scheduled for eight, two-minute rounds to be held at Marlins Park, Miami.

Evander Holyfield will fight Kevin McBride after negotiations for a bout with Mike Tyson fell through, according to Kris Lawrence, an adviser to Holyfield.

The eight-round exhibition match will take place June 5 in Miami on the undercard of a fight between Teofimo Lopez, the undisputed lightweight champion, and George Kambosos Jr.

Holyfield, 58, will be fighting for the first time in more than 10 years and against a boxer most famous for scoring a TKO against Tyson in what was the last fight of Tyson’s pro career.

But Lawrence also said he thinks a fight between Holyfield, the former undisputed heavyweight champion, and Tyson still will take place.

“It’s just too big not to happen,” Lawrence told USA TODAY Sports. “That would be the biggest show on earth, you know?”

“I have no clue about those guys,” Spicer told USA TODAY Sports. “Holyfield went from negotiating being a 50-50 participant in a major PPV event with Mike Tyson to being on the undercard.

“This event could lower the value of any potential Mike fight if Holyfield doesn’t look good.”